On Wednesday the 12th of November 2014 – shortly after 8am, the European Space Agency (ESA) will attempt to make history. Their Rosetta spacecraft is ready to undertake the next phase of its incredible mission – to launch its robotic lander packed with scientific instruments onto the surface of a comet.

Today, we take a look at Rosetta’s fantastic voyage to Comet 67P/Churyumov-Gerasimenko.

Rosetta was first launched on the 2nd March 2004 on an Ariane-5 rocket. After three fly-bys of Earth, a pass-by of Mars and then two years spent in deep-sleep hibernation to conserve power, Rosetta finally awoke in January 2014 and went on to make its rendez-vous with its target on the 6th August 2014.

After a ten year chase, the three tonne probe became the first spacecraft to orbit a comet – an incredible feat in its own right. The spacecraft consists of the Rosetta space probe orbiter and the Philae robotic lander with a mission to orbit comet 67P/C-G for 17 months to complete the most detailed study of a comet ever attempted.

After a lengthy 6 billion kilometre journey, the Rosetta spacecraft will now attempt to send the ‘Philae’ lander to the surface of Comet 67P/Churyumov-Gerasimenko – which is currently travelling through space at 40,000 miles per hour! 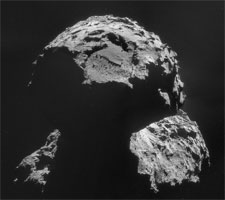 Based at the European Space Operations Centre (ESOC) in Germany, the Rosetta spacecraft’s mission control flight team will be attempting to fire the lander from a distance of 22.5km onto the centre of a 10 billion ton rotating comet.

Due to the speed of the comet and its distance from the spacecraft, any slight miscalculation could result in total failure and loss of the lander.

The descent of the lander is expected to start at 08.35 GMT on the 12th of November and will take around 7 hours to arrive at its landing site. This is made more complex by the fact that the event will take place 510 million kilometres away from earth, meaning that communications between Rosetta and the control team will experience a delay of 28 minutes and 20 seconds!

You can find the latest news on the Rosetta mission on the European Space Agency website.

The spacecraft is named after the Rosetta Stone, an Egyptian slab featuring ancient text in three scripts. The lander is named after the Nile island Philae, where an obelisk was discovered with Greek and Egyptian inscriptions. A comparison of the two pieces of text led to the deciphering of Ancient Egyptian languages.