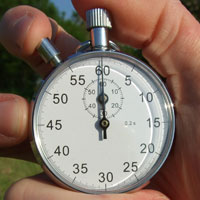 The Quantum 866 is the first mechanical stopwatch available from our store, Saturn Stopwatches. The 866 is supplied in a nice presentation box that can be used to store the stopwatch when not in use. The stopwatch itself offers timing to 1/5th of a second, with a large 60 second dial and a smaller 60 minute dial inset on its face.

The first thing to notice about the Quantum 866 is the presentation/storage box that the stopwatch is supplied in – a simple yet sturdy box with blue material inlay, that beautifully presents the 866 as an ‘old fashioned’ timepiece.

A lanyard/neckcord isn’t supplied with the 866, but one can easily be attached around the metallic loop around its crown if so desired. The glass on the front of the stopwatch is nicely curved towards the edges and allows a clear view of the face.

In the hand, the Quantum 866 feels solid and weighs in around 91 grams. As it’s a mechanical stopwatch, the 866 requires winding, but after a few quick clockwise turns of the winder the stopwatch is ready for action.

A press of the top button starts the clock ticking, with another press of the same button also used to then stop or pause timing. A third press will resume timing once more if required, or a quick tap of the side button will reset the stopwatch back to zero (the stopwatch shouldn’t be reset whilst the timer is running).

Usage of the Quantum 866 is incredibly simple. The buttons require a firm action and give a satisfying click when pressed. When timing, the quiet ticking is a refreshing sound in the digital age.

The Quantum 866 will time to 0.2 seconds (1/5th second) for up to an hour, so it’s ideally suited to events that don’t require critical split second timing.

If you’re after the traditional feel of a mechanical stopwatch and don’t require critical split-second timing, the Quantum 866 is for you. The Quantum 866 lacks a lanyard, but the presentation box and retro analogue movement in the digital age more than compensates.

4 thoughts on “Hands on with the Quantum 866 Mechanical Stopwatch”