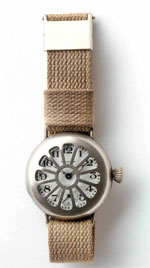 2014 marks the 100th anniversary of the outbreak of World War 1. In today’s blog post, we look at how wrist watches became essential pieces of equipment for officers in the trenches and the subsequent shift to fashion accessory after the war ended.

The “wrist-let” was a type of watch that was used by the military during World War I because traditional pocket watches were not practical for use in combat. Although originally viewed as a woman’s accessory, the wrist-let evolved into a timepiece called the Trench Watch, which was one of the first designs incorporating features from both pocket watches and wrist watches.