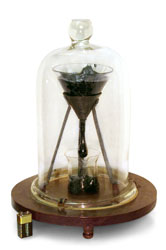 It’s amazing what can happen, given enough time. For instance, could something solid act like a liquid, if left long enough?

In today’s blog post we look at the World’s Longest-Running Laboratory Experiment and find out how time (and gravity) has dropped this 87 year long (and counting) experiment into the Guinness world record books.

In 1927, Thomas Parnell from the University of Queensland, Australia created an experiment to demonstrate the fluidity of seemingly solid materials.

Parnell wanted to show that ‘pitch’, a tough and solid, tar like substance that was traditionally used to help caulk the seams of wooden sailing boats, could actually behave in a similar manner to an extremely slow moving liquid.

At room temperature, pitch feels solid and can even be shattered if struck with a hammer, so Parnell began his experiment by heating the pitch and pouring it into a glass funnel. After sealing the stem of the funnel, Parnell left the pitch to settle for three years.

In 1930, the end of the funnel was cut, allowing the pitch to start ‘pouring’ out.

Gravity has since helped draw the substance out of the funnel drop by drop. However it’s an incredibly slow process, with each drop taking approximately a decade to form and fall. 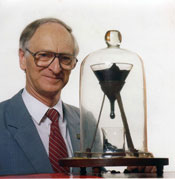 For many years, the custodian of this experiment was Professor John Mainstone. Sadly, Professor Mainstone was never able to actually witness a drop as it happened.

On three occasions he came close however, either by missing the event by a few hours and once due to popping out of the room for a cup of tea. Cameras were installed to record the subsequent drop, however when it did occur, the cameras were found to have malfunctioned at the crucial moment.

Professor Mainstone passed away in 2013, before he could witness the ninth drop in April 2014.

Today, you can watch The Pitch Drop Experiment live over the internet yourself. Be warned though – it may be another 14 years or so until it drops again – so when the time once again draws near, it may be wise to have a thermos flask of tea on hand so you don’t miss the action.

Gorilla Glass, frequently found in smartphone and tablet screens has also demonstrated ‘pitch-like’ liquid qualities, with researchers from the manufacturer Corning observing small micrometre movements in the glass over time!