In today’s blog post, we’ll delve into the fascinating world of atmospheric clocks and find out just how they can keep on ticking!

The original ‘Beverly’ Clock can be found on the 3rd floor of the Department of Physics at the University of Otago in New Zealand.

Remarkably, the clock is still running although it’s never been wound since it was first made by Arthur Beverly in 1864!

Born in Scotland in 1822, Arthur Beverly was a watchmaker, mathematician and astronomer. At the New Zealand Exhibition in 1865, Beverly put on show his very own side-board clock with compensation balance and apparatus to keep it wound up by the variations in the atmosphere.

The clock’s mechanism was driven by daily variations in atmospheric pressure and temperature. A change in either measurement would cause the air in a 28-litre air-tight box to expand or contract, which pushed on a diaphragm. A temperature variation of 3.3 °C over the period of one day created just enough pressure to raise a one-pound weight by one inch, which in turn drove the clock mechanism.

Although the clock hasn’t been wound since 1864, it has stopped when its mechanism needed cleaning or there was a mechanical failure. Sometimes, if the ambient temperature doesn’t change enough to absorb energy, the clock doesn’t function (although it starts again once the environment reaches the right conditions). 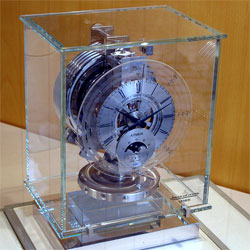 Similar to the Beverly Clock, the ‘Atmos’ clock is manufactured by Jaeger LeCoultre in Switzerland and also doesn’t need to be wound manually!

The mechanism gets the energy it needs from temperature and atmospheric pressure changes in the environment and so in theory, can run for years without human intervention.

The clock mechanism is set within an hermetically sealed capsule, containing a mixture of gaseous and liquid ethyl chloride, which expands into a chamber as the temperature rises, compressing a spiral spring.

When the temperature falls, the gas condenses and the spring slackens – and this motion constantly winds the mainspring.

Since they were first commercially produced in 1939, over 500,000 Atmos clocks have been produced to date.

The first clock powered by changes in atmospheric pressure and temperature was invented by Cornelis Drebbel in the early seventeenth century!