In today’s blog post, we’ve decided to take a trip through time and look back at perhaps the father of time himself – Galileo – and his magnificent contribution to the measurement and our understanding of time. 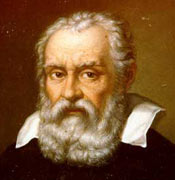 Galileo Galilei (1564–1642) was an Italian physicist, mathematician, astronomer and philosopher.

At just 20 years of age, while studying medicine, Galileo noticed a lamp swinging overhead while he was in a cathedral. He was curious to know how long it took the lamp to swing back and forth – so he used his pulse to time the swings.

Law of the Pendulum

Galileo discovered that the period of each swing was exactly the same, and thus discovered the law of the pendulum – a key factor in the regulation of clocks.

In 1642, Galileo’s son sketched a clock based on his father’s theories, but it was never actually built and needed such large pendulum swings, it wouldn’t have been very accurate! Around 100 years later, Dutch mathematician Christiaan Huygens (1629–1695) utilised the swinging pendulum to create an accurate device to tell the time.

In his last year, when totally blind, Galileo designed a mechanism for a pendulum clock – now known as “Galilieo’s escapement”. The basic principle of this and all mechanical clocks is that the energy in a coiled spring or falling weight is released in regular pulses. This mechanism is called an escapement because it allows the energy to ‘escape’ from the system. 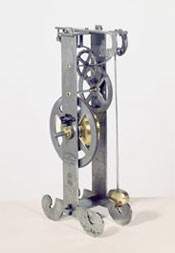 Pendulum Clock, based on Galileo’s idea.

Galileo used a pair of catch devices to fit into a notched pin-wheel, connected to a pendulum. As the pendulum swings, one catch lifts clear of the pins allowing the wheel to rotate until ‘caught’ by the other catch device. As the device catches, it sends a small impulse of energy to the pendulum which keeps it going. The pendulum regulates the release of energy and is also recharged every time it is moved – like a child on a swing!

Galileo’s observations of pendulums had a massive impact on our understanding and measurement of time. Despite the hi-tech world we now live in, it’s still possible to study “regular periodic motion” by simply hanging a dense weight from a length of twine.

Galileo was also the first to observe Saturn, back in 1610. Due to the planet’s unique rings, he originally thought it was a three-bodied system. When Galileo viewed Saturn again in 1616, the rings where pointing towards earth, causing him to think they had disappeared!