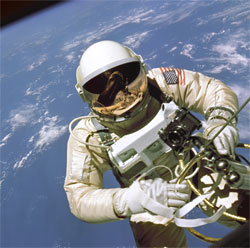 The Omega Speedmaster wristwatch picks up the honour of being one of the first stopwatches in space?

In fact, it was also the first stopwatch on the moon and even now this model is still used in spaceflight by NASA.

Today, we’ll look at the fascinating history of the Omega Speedmaster – one of the first stopwatches in space and first on the moon!

Omega had been producing chronograph (stopwatch) watches since 1957 but with the arrival of the American space programme in the 1960’s, the Speedmaster was declared by NASA as “flight-qualified for all manned space missions”. It was in fact the only wristwatch to have passed all of the strict tests under conditions such as zero gravity, magnetic fields, extreme shocks, vibrations and temperatures ranging from -18 to +93 degrees Celsius.

Apart from telling the time, the Speedmaster Professional watch had a third-hand stopwatch function plus three interior dials showing a second-hand ancillary to the conventional time; a minute elapsed counter for the chronograph and an hour elapsed counter. The outside of the dial included a Tachymeter to measure miles per hour. 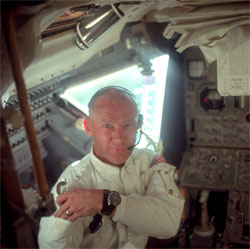 During the disastrous Apollo 13 mission of April 1970, the Speedmaster Professional contributed to the rescue of the crew and earned OMEGA the high distinction “Snoopy Award” from NASA. When American astronaut Tom Stafford met with Russian cosmonaut Alexei Leonov in space in 1975, both men were wearing Speedmaster Professional watches – another historic moment for OMEGA ensuring that Russia would use the same timepiece for all manned space missions!

As the era of the space shuttle began, the Speedmaster Professional was again the timepiece of choice for NASA and was chosen to endure a new series of rigorous tests – notably aboard the Russian space station MIR in the early-1990’s.

The Speedmaster X-33 was thoroughly tested on the MIR laboratory in 1998 and is now flight-qualified by both NASA and the Russian space agency. But the original, OMEGA Speedmaster remains as the only watch certified for “extra-vehicular activity”.

Sadly, Buzz Aldrin’s original watch was lost in transit on its way to a museum display in 1971. Its current whereabouts are unknown…

One of our very knowledgeable Twitter readers has very kindly pointed us in the direction of two other notable watches that have made earlier trips into space than the Omega Speedmaster.

The first, a Sturmanskie mechanical wristwatch was worn by Yuri Gagarin in 1961 aboard the historic Soviet Vostok 1 mission. The Sturmanskie should therefore take the honour of being the first wristwatch worn in space.

However whilst the Omega Speedmaster remains the first stopwatch on the moon,  @petawawa76 points out that it was an American, Commander Scott Carpenter, who wore a Breitling Navitimer aboard the Mercury-Atlas 7 mission in 1962 – this would enable the Breitling to take the plaudits as being the first stopwatch in space, beating the Omega Speedmaster’s first trip to space by three years!